For years, right-wing politicians and pundits have accused the left of playing “the race card” and “the woman card” and engaging in identity politics. This eye-opening documentary turns the tables and takes dead aim at the right’s own longstanding use of white male identity politics in American presidential elections. Ranging from Richard Nixon’s tough-talking, fear-stoking law-and-order campaign in 1968 to Donald Trump’s hyper-macho revival of these same tactics in 2020, The Man Card shows how the right has employed a deliberate strategy to frame Democrats and liberals as soft, brand the Republican Party as the party of “real men,” and position conservatives as defenders of white male power and authority in the face of seismic demographic changes and ongoing struggles for equality. The Man Card pays special attention to how the right has used white-male identity politics to channel the legitimate, class-based grievances of millions of white men into unbridled resentment of people of color, immigrants, women, the LGBTQ community, and so-called “liberal elites.” It also shows how this siege mentality has undercut the presidential prospects of women and undermined the nation’s ability to adapt to a changing world. A co-production of the Media Education Foundation and Eat the Moon Films, The Man Card was directed by acclaimed filmmakers Peter Hutchison and Lucas Sabean, and was created and co-written by political analyst Jackson Katz, the author of the award-winning book Man Enough: Donald Trump, Hillary Clinton & the Politics of Presidential Masculinity. 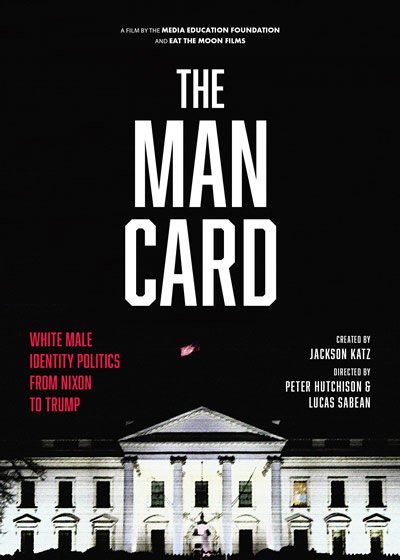 “Essential viewing for not only every gender and politics course, but for any and all students of American politics.”

“A vitally important documentary to understand the gendered and racialized ideologies shaping political polarization in the U.S.”

“Jackson Katz methodically shows that Trump’s strategy to connect masculinity to presidential politics is nothing new. A must-see documentary for anyone interested in American politics and contemporary democratic struggles.”

“This fast-paced documentary shows how presidential candidates from Nixon to Trump have mobilized masculinity as a central means to attract the support of white working-class men. Sure to generate lively discussion about politics and masculinity in gender studies and American government courses.”

“Comes at a perfect time to contribute to the growing intersectional movement that is turning the page on the politics of hatred, fear and violence, as it bends the arc of history toward a future of peace and social justice.”

THE MEDIA EDUCATION FOUNDATION (MEF) produces and distributes documentaries that focus primarily on the social, political, and cultural impact of corporate news and entertainment media narratives. Since its founding by Sut Jhally in 1991, MEF has produced and distributed scores of films on a range of subjects, from media coverage of the Iraq war and the Israeli-Palestinian conflict to the cultural influence of advertising and the public relations industry to the way commercial media narratives shape public attitudes about race, class, gender, and sexuality. Over the past 20-plus years, MEF has had the privilege of collaborating with Jackson Katz, the creator and co-writer of The Man Card, on a number of videos, including “Tough Guise: Violence, Media & the Crisis in Masculinity” (1999), “Wrestling with Manhood: Boys, Bullying & Battering” (2003), and “Tough Guise 2: Violence, Manhood & American Culture” (2013).

EAT THE MOON is a collaboration between award-winning documentary filmmakers Peter Hutchison and Lucas Sabean. Eat the Moon believes in film as a transformative medium — and essential form of storytelling — in a world deeply in need of new contending narratives. Their work, grounded in social justice, aims to foster critical discussions around politics & civic responsibility, race & oppression, masculinity & identity, spirituality & religion, and soccer – the beautiful game.

Jackson Katz is internationally renowned for his pioneering scholarship and activism on issues of gender, race, and violence. He has long been a major figure and thought leader in the growing global movement of men working to promote gender equality and prevent gender violence. He is co-founder of Mentors in Violence Prevention (MVP), one of the longest-running and most widely influential gender violence prevention programs in North America, and the first major program of its kind in the sports culture and the military. Katz was one of the key architects of the now broadly popular “bystander” approach that MVP introduced to the sexual assault and relationship abuse fields. Since 1997 he has run MVP Strategies, which provides sexual harassment and gender violence prevention/leadership training to institutions in the public and private sectors in the U.S. and around the world. He is the author of two critically acclaimed books, The Macho Paradox: Why Some Men Hurt Women and How All Men Can Help, and Man Enough? Donald Trump, Hillary Clinton and the Politics of Presidential Masculinity. He is also the creator of the Media Education Foundation’s award-winning “Tough Guise” video series on violent masculinity in American media, and has collaborated with MEF on a number of other films, including “The Bystander Moment: Transforming Rape Culture at its Roots.” Katz’s writing and commentary on politics and gender also appear regularly in national media. 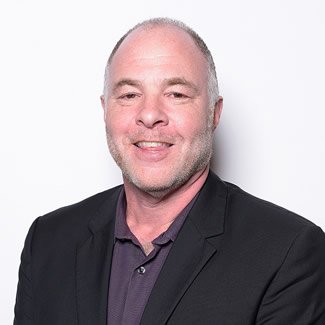 Peter Hutchison is an award-winning filmmaker, NY Times Bestselling author, educator, and activist. He produced & directed “Requiem for the American Dream: Noam Chomsky and the Principles of Concentration of Wealth and Power” (Netflix). A NY Times Critics Pick and #1 selling doc on iTunes, the book version of the film was a NY Times Bestseller (Seven Stories Press). His most recent film, the critically acclaimed “Healing from Hate: Battle for the Soul of a Nation” (Freestyle Digital Media/Media Education Foundation) is currently in theatrical release. The film examines the root causes of hate group activity through the bold work of former Skinheads & neo-Nazis, now engaged in de-radicalizing violent extremists, and transforming attitudes of intolerance. His longstanding commitment to issues around male identity has resulted in the films: “You Throw Like A Girl: The Blind Spot of Masculinity” (MEF), “Angry White Men: Masculinity in the Age of Trump” (Grasshopper), and newly released, “The Man Card: White Male Identity Politics from Nixon to Trump” (MEF). His numerous films include “What Would Jesus Buy?” (Sundance Channel Feature), “SPLIT: A Divided America” (IFC Choice Indie), its follow-up “SPLIT: A Deeper Divide” (The Documentary Channel), and “Awake Zion” (Film Buff). The forthcoming “Devil Put the Coal in the Ground” is slated for release in 2021. He holds a Masters Degree in Counseling Psychology with a focus on Addictions and Systems Dynamics. 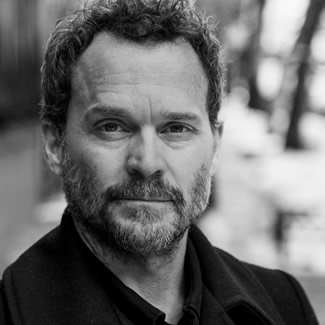 Lucas Sabean is a professional director, producer & editor, and co-founder of Eat The Moon Films and Big Tent Productions. He co-directed, produced & edited “The Man Card: White Male Identity Politics From Nixon to Trump” (2020, Media Education Foundation) co-directed & edited “Angry White Men: Masculinity in the Age of Trump” (2019, Grasshopper Films), and co-directed, produced & edited “You Throw Like A Girl: The Blind Spot of Masculinity” (2020, Media Education Foundation). He produced and edited the critically acclaimed “Healing from Hate: Battle for the Soul of a Nation “(2020, Journeyman Pictures/Freestyle Digital Media/MEF release), official selection DOC NYC, Big Sky Docs, DOCS MX, DOCS Valencia and the Havana Film Festivals. He is co-directing, producing and editing “Devil Put the Coal in the Ground” (2021, Rogovy Foundation grant recipient), and producing/editing “In Darkness & In Light: A Journey of Atonement in Auschwitz” (2021). His other credits include his short film “Relievio” (2000, Slamdance & Telluride FF), the narrative feature “Roof to Roof” (as associate producer, 2001, Sundance FF), in addition to “End of Era” (2003, Underground Zero), and “The Last Stand” (2008, Best Feature Film by a local filmmaker, Backseat FF). Choreographer Paul Taylor has called his experimental films “superb – like poems made visible.” He has an MFA from Boston University in Film Production. 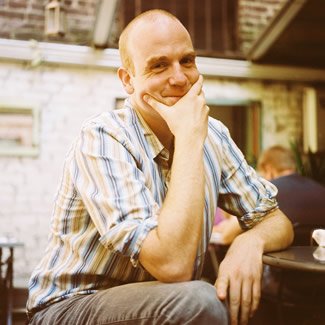 Jeremy Earp is the Production Director of the Media Education Foundation (MEF). He has directed, co-directed, written, and co-written several MEF films, including “Hijacking Catastrophe: 9/11, Fear & the Selling of American Empire” (2004); “War Made Easy: How Presidents & Pundits Keep Spinning Us to Death” (2007); “Blood & Oil” (2008); “Consuming Kids: The Commercialization of Childhood” (2008); “The Mean World Syndrome: Media, Violence & the Cultivation of Fear” (2010); “Not Just a Game: Power, Politics & American Sports” (2010); “This Land is Our Land: The Fight to Reclaim the Commons” (2010); “The Purity Myth: The Virginity Movement’s War on Women” (2011); “Tough Guise 2: Violence, Manhood & American Culture” (2013); “The Occupation of the American Mind: Israel’s PR War in the United States” (2016); “The Great White Hoax: Donald Trump and the Politics of Race & Class in America” (2017); “Advertising at the Edge of the Apocalypse” (2017); “Digital Disconnect: How Capitalism is Turning the Internet Against Democracy” (2018), and “The Bystander Moment: Transforming Rape Culture at Its Roots” (2018). Prior to joining MEF in 2002, he taught at New School University and Parsons School of Design in New York City, at the Art Institute of Boston and Northeastern University in Massachusetts, and worked as a news and sports reporter for a daily newspaper in the Greater Boston area.

Loretta Alper has produced and/or co-directed several documentaries for the Media Education Foundation, including “No Logo: Brands, Globalization, Resistance” (2003); “Captive Audience: Advertising Invades the Classroom” (2003); “Class Dismissed: How TV Frames the Working Class” (2005), “War Made Easy: How Presidents & Pundits Keep Spinning Us to Death” (2007); “The Occupation of the American Mind: Israel’s PR War in the United States” (2016), “Advertising at the Edge of the Apocalypse” (2017), “The Great White Hoax: Donald Trump and the Politics of Race & Class in America” (2017), “The Bystander Moment: Transforming Rape Culture at its Roots” (2018), and “Digital Disconnect: How Capitalism is Turning the Internet Against Democracy” (2018). In addition, she heads up MEF’s media research team. Prior to joining MEF in 2000, she was a high school English teacher in Amherst, Mass., worked for a number of independent print and radio outlets, curated an independent film series, and was a 35-mm film projectionist.

Sut Jhally is the founder and Executive Director of the Media Education Foundation (MEF). He is the producer, director, or executive producer of dozens of MEF films, including “Dreamworlds: Desire/Sex/Power in Rock Video” (1990); “Advertising & the End of the World” (1997); “Tough Guise: Violence, Media & the Crisis in Masculinity” (1999); “Killing Us Softly 3” (1999); “Wrestling with Manhood: Boys, Bullying & Battering” (2003); “Peace, Propaganda & the Promised Land: U.S. Media & the Israeli-Palestinian Conflict” (2004); “Hijacking Catastrophe: 9/11, Fear & the Selling of American Empire” (2004); “Reel Bad Arabs: How Hollywood Vilifies a People” (2006); “Dreamworlds 3: Desire, Sex & Power in Music Video” (2007); “The Codes of Gender: Identity & Performance in Popular Culture” (2009), “The Occupation of the American Mind: Israel’s PR War in the United States” (2016), and “Advertising at the Edge of the Apocalypse” (2017), “The Great White Hoax: Donald Trump and the Politics of Race & Class in America” (2017), and “Digital Disconnect: How Capitalism is Turning the Internet Against Democracy” (2018). He is Professor Emeritus of Communication at the University of Massachusetts, a leading scholar on advertising, public relations, and political propaganda, and the author of several books, including The Codes of Advertising, Enlightened Racism, and The Spectacle of Accumulation.